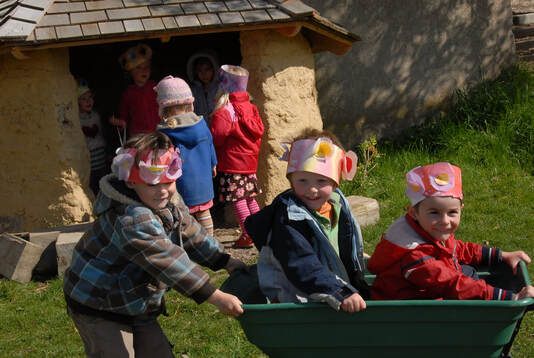 Kindergarten is an integral part of the Dunedin Rudolf Steiner School and  provides a solid foundation upon which subsequent academic learning can flourish. Kindergarten  addresses the development of a creative imagination, provides focused activity, and nourishes a sense of wonder and reverence for all life. By around the age of 3 and a half children are ready to join one of the three kindergartens rooms situated on the school campus at Maia.

Each day has its rhythm and the children come to know that each day also has its own activity, rather than all activities being available "on demand".

Monday may be painting day, Tuesday preparation of a vegetable soup, Wednesday baking day, and so on. Sometimes there is a special time for a particular activity, sometimes the activity arises out of free play.

The daily rhythm may start with morning circle, including some singing or dance and move on to a period of free play or involvement in that day’s special activity. Then the children may come together again for a more reflective, inward moment in the day before washing hands before morning tea at the table.

After morning tea it is time to go outside, to swing, build in the sandpit, to climb or to help care for the garden. Children will then come in for a story told – and not read – by the kindergarten teacher, before getting ready for lunch. Parents will collect their children after lunch, unless they are staying for the afternoon, in which case they will have a period of rest before afternoon play or other activity.

Not only does each day have its rhythm, and each day of the week, but the rhythms of the year – our seasons – are reflected in the work at the kindergarten. Seasonal influences or festivals are woven into stories and activities.

The kindergartens offer 20 hours free funding.
Our morning sessions run from 9 am - 1.30 pm.
Afternoon sessions continue on until 3pm

Children usually start after their third birthday, attending around three morning sessions a week to begin with. Each group has a mixture and balance of ages of both boys and girls aged from three to six years. Children remain in kindergarten until after their sixth birthday and finish the year together before entering Class One the following year.
There are currently two rooms with mixed ages from 4 - 6 years old   Our third room is for  the younger 3 and 4 year olds.